Today marks the third day of my being stuck in the airport. But alas, I was finally able to go home together with my husband in one piece.

We were more than ready to go home at half past 6 in the evening after our week-long stay in Cebu for work. However, due to an accident that took place in Manila causing an aircraft to block the runway, our flight got cancelled. This was the first time I saw the airline ground staff of Cebu Pacific in utmost panic. They were unable to appease the passengers who were going ballistic over the incident nor was there an organized system followed. Since the matter was not their fault (force majeure) according to them, they were unable to provide customers overnight accomodations to a hotel. While there was an attempt to offer meals, majority of the supposed passengers were mostly tired and confused since no direct answer was offered to them. In the end, we had to cancel our flight online as the quere in the ticketing office was rather long. We likewise purchased new tickets via another carrier – Philippine Airlines – to Clark, Pampanga. In addition, we made a last minute booking in Crown Regency Hotel since we had no place to stay. While the accomodations itself was rather shabby, we were too tired to critique it and simply went to sleep that evening.

Our flight to Clark via PAL was scheduled at 1:10 PM. Entering the airport a second time was surreal. I couldn’t believe that I was still in Cebu. We were informed that our flight was going to be delayed. After what seemed like forever, we were told that the flight was cancelled yet again. Already, I was thinking as to why I was having such luck. Did I wrong someone? Did I do something terrible? Or worse, am I cursed? We are talking about PAL here, one of the most reputable airlines in Asia. Still, things were pretty disorganized. The attendants, mostly contractuals under an independent service provider, did not know how to go about entertaining passengers in the most efficient way possible. While priority was given to those with connecting flights, the rest of us were kept waiting for hours. Since the problem they had was a mechanical failure, the airline covered our hotel accomodations, meals, and transportation. The actual arrangement of hotel stay and ticket rebooking was rather askew and there were only 2 persons behind the counter arranging the tickets and bookings.

Yes, while I am thankful that we had a place to stay, it was quite late by the time we arrived at the hotel due to the very slow pace of the staff in handling arrangements. I slept at around midnight already and woke up as early as 4 am the next day to prepare for our 9 am flight.

We took breakfast in the hotel at around 6 am. Shortly after, my husband received an advisory from google mentioning that our flight got delayed once again to 1 pm. It is good that we were still at the hotel. We had the chance to freshen up and rest a bit before heading off to the airport.

On my third day at the Mactan Airport, I was pretty accustomed to the scene. Free meal vouchers were given as soon as we arrived due to the flight delay. I was actually no longer surprised. We finally boarded the plane by 1:42 pm but stayed there for a bit because of air traffic in Manila.

Some had to transfer planes because they had connecting flights to other countries. I am just glad I downloaded some episodes of ‘Boys over Flowers’ and kept myself busy laughing and crying while watching such. Finally, we were airborne a few minutes after 4 pm. While people around me were complaining about their domestic flight that felt like an international flight due to the prolonged wait time, I was just happy to have finally landed in Manila. That concludes my three day stay at the Mactan Airport.

For sure, this dilemma that roots to the skidding of Xiamen Airlines/tarmac concern/runway closure in Manila will lead our government to realizing the change that needs implementing with regard to air travel. I will not add anymore comments on the matter as there are already plenty in local and international news. But I strongly recommend that if we have so many safety drills such as earthquake and fire drills, airline ground staff should likewise be provided ample training in systematically attending to passengers in the event of flight cancellations.

Here were the things I did to keep my sanity during these flight delays:

1. I befriended the other passengers. Of course, I did not get to know their names personally but people who are in the same predicament could definitely relate to one another. We gave each other knowing looks and smiles. We got frustrated and joked around together. Still, the general attitude of Filipinos still permeates. Mababait talaga ang mga Pinoy (Filipinos are really nice.) They are incapable of staying mad for so long.

2. I weighed myself and checked out the other empty counters. Well, nobody was stopping me. Do take note that the weight indicated there is somebody else’s weight and not mine. Haha! Defensive! 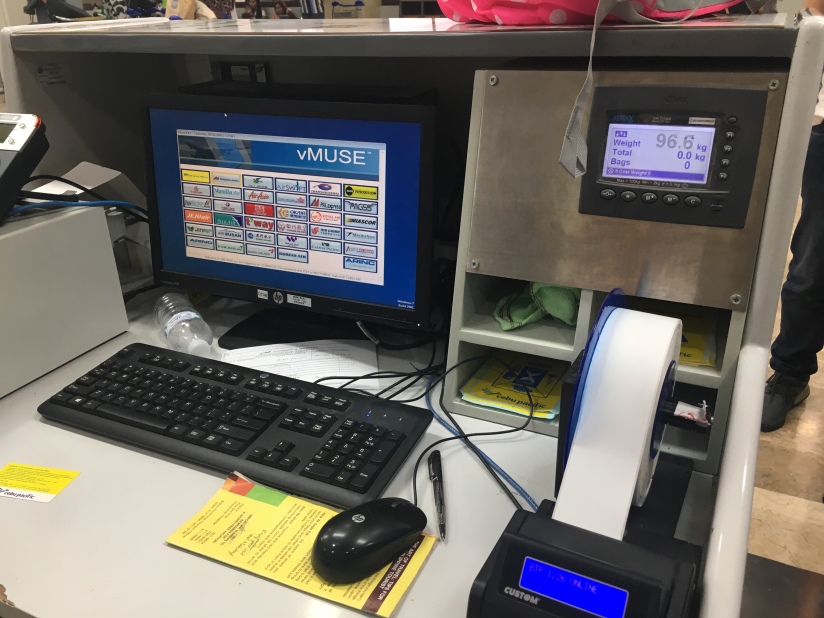 3. I tried to extend assistance to the ground staff by asking all the passengers to endorse the tickets to them so that the staff can organize this and call for the passengers in an orderly manner.

4. I urged the one who appeared to be in charge to call for additional reinforcement as the ground staff they had was not enough.

In short, I stepped it up to the point that one of the passengers told me that I should work for PAL. I didn’t know if I should be happy or embarrassed for having done what I did. In the end, I was still among the last passengers attended to because my sequence number was further down. Still, it was an experience….something I don’t wish to happen again, EVER. Lol!

To be annoyed is human, to move on divine

For things to work smoothly, especially in the course of emergency situations, it requires people to think quickly and to use their common sense. It’s not enough to stay calm without taking commensurate efficient action.

A system must be in place always! Nothing beats a clear-cut system that is known to all employees.

We are all in varying situations. It’s best not to compare one’s situation with that of another. It’s human nature to feel hassled about certain occurrences. That’s just that.

I love to wanderlust and take photos wherever I go. DIY traveling is my thing and I enjoy snagging good travel deals. I hope to be able to share snippets of my travels and in the process, get to interact with like-minded people with a penchant for exploring the world around them. Proud Filipino :) View all posts by Travel Often